Free Shipping On All Orders!

Get Your Favorite Art Today With afterpay!

Photo of the Week - Aerial Shot of Santa Cruz at Sunrise

Have you ever wanted to float through the clouds or soar like an eagle?

If you're like me, the answer to this questions is a definite yes! Ever since I was a kid, I was fascinated with the thought of flying like a bird, a plane, or yes, even Superman. Well, modern technology has made that dream come true for me.

What's that, Tony, you're flying all by yourself these days?

Continue Reading
Photo of the Week - Surfer's Path to the Point

Surfers carry their boards down the path to the point. Read how I created the shot.

You could look at a thousand photographs of Pigeon Point Lighthouse, and it's likely you won't see a shot from this perspective.

Continue Reading
Photo of the Week - Sunset at Mono Lake

A couple of weeks ago, my wife and I spent some time in the small town of Lee Vining, home to Mono Lake, and close to many beautiful places to visit. We spent a couple of days exploring and hiking around, and in, the Mammoth and June Lake Loop areas.

We also made time to spend an evening at Mono Lake, and it's a good thing we did because we were treated to an amazing sunset experience. While there, I managed to capture several beautiful images, and this weeks photo is one of my favorite shots from the night.
Tufa Towers - Mono's Magnificent Monuments
These bizarre looking rock formations that line the shore of Mono Lake are known to geologists as tufa (too'-fah).
So what are these things? 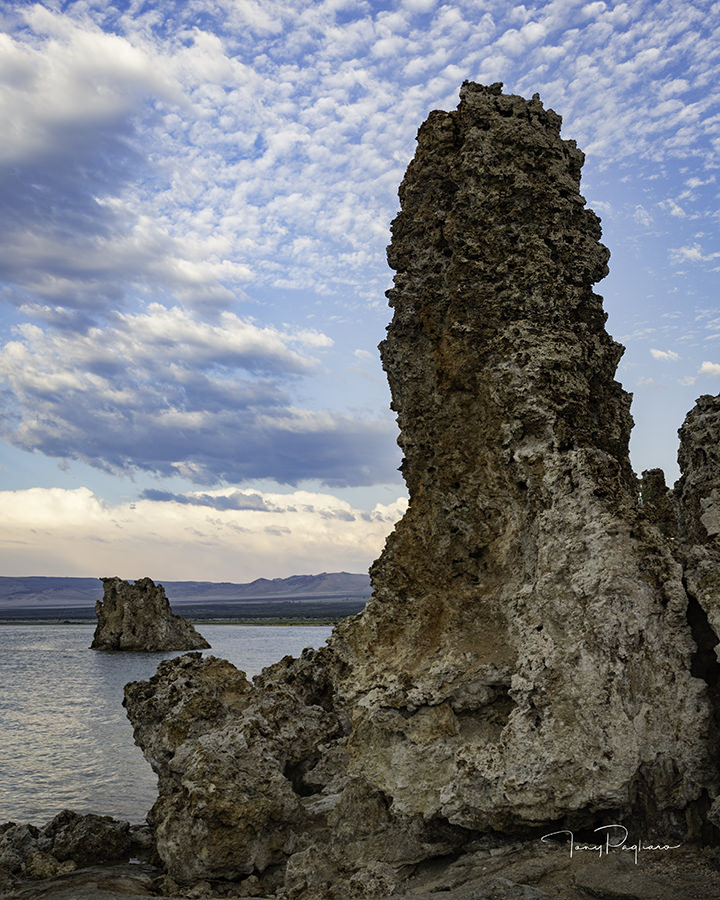 What is uncommon about this limestone is the way it forms. Typically, underwater springs rich in calcium (the stuff in your bones) mix with lake water rich in carbonates (the stuff in baking soda).

As the calcium comes in contact with carbonates in the lake, a chemical reaction occurs resulting in calcium carbonate-limestone.

The calcium carbonate precipitates (settles out of solution as a solid) around the spring, and over the course of decades to centuries, a tufa tower will grow. Tufa towers grow exclusively underwater, and some grow to heights of over 30 feet!
It gets better:
Click continue reading to see more shots of this fantastic sunset!

"Bodie sends greeting and proclaims
to the mining world that her gold mines are the most wonderful yet discovered."
This was the first telegraph message sent to the outside world in 1877.
Today, Bodie is a ghost town, a California state park, and a National Historic site.

In 1879, Bodie was a booming gold mining town. Houses, hotels, saloons, and stables were built to support a growing population of nearly 10,000 people!

Hundreds of bearded miners, in dirt stained shirts and black boots, could be seen making their way to and from the mines each day.

Times were good.
Where did all the people go?
Continue Reading
Photo of the Week - Venice Promenade, Italy

Is there romance in your life?
How about some pasta, pizza, or a fine Tuscan Wine?

If you answered yes to these questions, there's a good chance you may be in Italy right now... you lucky dog!

If you answered no, perhaps you need some inspiration.

Recently, as I've scrolled through my Facebook timeline, several of my friends have posted beautiful pictures of their travels to Italy this summer.

I've seen pictures of Rome, Venice, Tuscany, Amalfi, and Florence, beautiful places that remind me of the time I spent in Italy.

Inspired by these photos, I decided I would feature one of my favorite images from a trip to Italy my wife and I took back in 2008.

I captured this shot during our visit to Venice, while I was in a water taxi heading to the small Island of Burano, Italy.

Want to see a few more?

I've got a handful of images that have never been seen before, and I would love to share them with you.

Last week, I featured an image titled Seal Rock that I captured at Lighthouse Point.

This week, I am sharing another shot from Lighthouse Point that I photographed on that same morning.

Walking around the Point in search of this shot, I couldn't help but marvel at the multiple layers of rock, colors, and shapes. In the Santa Cruz area, coastal change can occur slowly or rapidly, depending on the stability of the rocks making up the cliffs, and the intensity of the waves, especially large storm waves at high tides.

Lighthouse Point owes its longevity to erosion-resistant siltstone and mudstone, which protect it from powerful waves produced in this area.

However, beneath the point, caves on the north and south sides continue to erode slowly, and eventually, this erosion will likely lead to another bridge or arch forming underneath the Point near the lighthouse.

Most people never find their way out to the point, and for a good reason, the path out there can be somewhat sketchy, especially during high tide, and individuals should proceed with caution whenever venturing out there.

That being the case, you have probably never seen Seal Rock and the Point from this perspective, so I thought it was important to capture all the colors, layers of rock, and shape of the point to give you the feeling of being there in the moment. What do you think, did I pull it off?

The featured image for this week is a capture of Seal Rock, which is located just off Lighthouse Point in Santa Cruz.

Seal Rock is a small island located just off Lighthouse Point in Santa Cruz, and as the name suggests, is a place several seals can be found daily relaxing and soaking up the sunshine. Alongside the seals, dozens of pelicans, cormorants, and other birds can be seen here as well.

I was fortunate to be out on such a beautiful morning, and I managed to capture several excellent images. I will be featuring some additional shots from this morning in future newsletters. However, I have put aside a few pictures to share with you. Click continue reading to view

This week, I'm sharing with you a fun shot I captured at 4-Mile Beach last March. Two months have gone by since I took it, and I still don't have a title for it, so I thought I would see what ideas some of you could come up with for a title. Click on continue reading for the full story

Did you know that over 100 years ago Bird Rock was known as Bridge Point? At one time, these islands of rock were one solid piece, extending out into the ocean.

Over time, two natural bridges formed when energy from the waves focused on the sides of the land mass, eroding the softer areas away, eventually creating not one but two natural bridges. Click continue reading for the rest of the story.

Today's image is a sunrise shot of Walton Lighthouse, located at the Santa Cruz Harbor. This is another image I've had in my mind for quite a while but never found time to photograph. Read how I captured the shot.

For a few years now, I've had this shot in mind, but for some reason, I never went out and captured it.

Well, I got around to it a couple of weeks ago, and I can finally cross this one off my bucket list. Read how I captured the shot.

I've always found the moon to be romantic, dreamlike, and hypnotic. This image was captured on a Monday night along Westcliff Drive. I must have taken at least 100 shots with different compositions, both vertical and horizontal. This was my favorite from the evening. Click on the read more tab to see some other photos from the evening shoot.

Last week I had a chance to spend the afternoon at one of my favorite beaches, 4 Mile Beach.

It was a couple of hours before sunset, and I was looking for a unique composition to photograph. I fell in love with the flow of this rock formation extending from the cliffs out to the ocean. I spent about a half hour composing shots from different angles, but the light had become flat, and for some reason, I was feeling uninspired. Click on the link below for the full story.

Photo of the Week - Morning Bliss

The color was becoming more intense; I had underestimated how much time I had. I am now running with my camera, mounted on the tripod with the legs fully extended in one hand, and my backpack in the other. "Only 50 yards to go, I can make it," I told myself. read the full story

Continue Reading
Photo of the Week - Sunset at Baldwin Creek

Photo of the Week - Sunset at Baldwin Creek

Some days when you go out photographing, things just don’t turn out how you planned. The elements may change, or not evolve as you hoped, and you have to make the best out of what’s happening around you.

How I Got the Shot:

I woke up early to the sound of thunder, grabbed a cup of coffee, and headed out the door...

The presence of this badge signifies that this business has officially registered with the Art Storefronts Organization and has an established track record of selling art.

It also means that buyers can trust that they are buying from a legitimate business. Art sellers that conduct fraudulent activity or that receive numerous complaints from buyers will have this badge revoked. If you would like to file a complaint about this seller, please do so here.

The Art Storefronts Organization has verified that this business has provided a returns & exchanges policy for all art purchases.

I have two unique warranties to protect your investment. A 90 day, 100% Money Back Guarantee and a Lifetime Fade-Free Warranty. Please see my Guarantee Page located in the Navigation Bar for more details.

This website provides a secure checkout with SSL encryption.

The Art Storefronts Organization has verified that this Art Seller has published information about the archival materials used to create their products in an effort to provide transparency to buyers.

We use only the highest quality OEM archival inks, fine art paper, and canvas for all of our products. https://www.breathingcolor.com/lyve

Your cart is currently empty.

This is only visible to you because you are logged in and are authorized to manage this website. This message is not visible to other website visitors.

The above preview shows how to use the live preview on this website. The image displayed is just an example, and is not available for sale.

This means you can use the camera on your phone or tablet and superimpose any piece of art onto a wall inside of your home or business.

To use this feature, Just look for the "Live Preview AR" button when viewing any piece of art on this website!

Below, select which favorite lists you would like to save this product into.

Enter your email below and we'll email you a 20% OFF Coupon right now.

This offer is valid for NEW CUSTOMERS only.